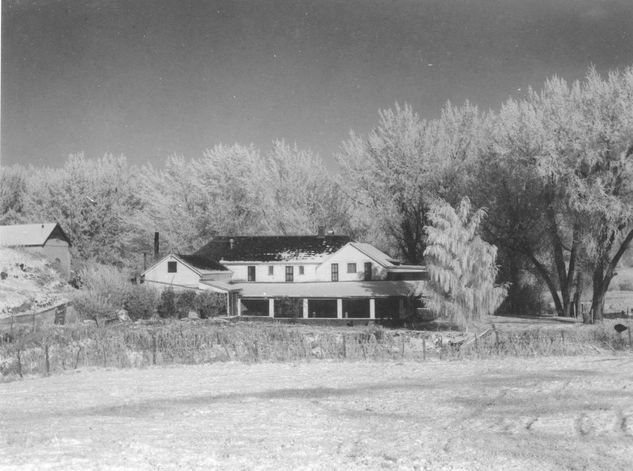 
Maria hired a woman from Terry to help her cook and serve this special meal. The menu was roast beef, turkey, and a large pork roast. JB had ordered several tins of oysters, (a rare treat), from the Mercantile for a special bread dressing and there were heaps of mashed potatoes and turnips, plus winter squash. The boiled onions, fried celery, and stewed carrots were a hit, as well as the smoked tongue, Parker house rolls, calves feet jelly and fruit preserves.  Dessert was mince pie, plum pudding with whiskey sauce, and fruitcake.
When all were seated, JB said the blessing. He thanked the Lord for His provision in past years, and for mercy and guidance in the future. Then he offered thanks for all the families gathered there and for their care of one another. He ended his prayer with gratitude for the supreme gift of the Christ child sent to earth to be our guiding light.
After the meal, JB read the Christmas story in the Book of Luke from the large family Bible. Each family opened a small gift from JB and Maria, and then the group stood around the organ and sang carols, while the children played board games in the dining room and sneaked back for more desserts. The men commiserated about the cold weather and JB told the group that they were welcome to any extra feed he had. When guests left in their buggies, a heavy snow was falling and temperatures had dropped considerably. Families cuddled down into fur robes and headed for home.
Those who gathered at the Kempton Ranch that Christmas did not know what lay ahead, and perhaps that was a blessing.  JB did not know that most of his cattle would perish in the intense cold and that he would jokingly recall losing a whopping one-hundred-ten percent of his stock: one hundred percent to the cold and another ten percent just to find where they all went. It was a joke without humor. Ranchers did not know that they would agonize over the loss of their cattle, but be powerless to help and that herds would die stacked up one on another trying to find shelter. They did not know that many of their neighbors would be forced into bankruptcy and move away from the Yellowstone Valley. JB did not know that he would be fortunate enough to have the financial reserves to restock with Texas longhorns, a breed better able to stand the cold.
In early January of 1887, it snowed for sixteen hours at about an inch an hour and the temperature fell to minus 25. Snow continued and temperatures hit 40 below zero. Intermittent snow fell for another ten days, with continued extreme cold. Those without hay to feed their animals had to sit by and watch their herds slowly die. Ranchers who had raised winter feed frantically tried to get it out to their cattle during breaks from the cold. Some ranchers took JB up on his offer of extra feed, but the problem lay in transporting it to their cattle.
There was a respite of a little more than a week until a blizzard struck the end of January. For three days and nights, blowing snow made it impossible to see and thermometers read 63 below zero. A sudden let up of the cold gave the promise of a Chinook, (a warm wind that usually comes in the late winter), but another storm set in and lasted through February 3. Winter seemed to go on forever.

One blessing of that long winter on the Kempton Ranch was the spectacular icy display of the artesian spring nearest the house.  This natural spring, which was under pressure, was at its best with lacey layer upon layer of frozen water. Folks came from miles around just to look.
Finally, at long last, spring came and temperatures moderated, but it was a grim spring indeed. As the snow melted, carcasses of the once massive herds dotted the landscape as far as one could see. An old timer recalled seeing bloated rotting carcasses with all four legs up floating down snowmelt-swollen creeks and rivers.  The water supply was affected for weeks until the dead cattle washed downstream or could be hauled out of waterholes.  Clean drinking water was in short supply and a stench filled the air for weeks. The few remaining cattle that had survived the winter were emaciated and suffering.
Millions of cattle perished during the “Great Die Up” as that fateful winter was called.  "Hell's Roundup" was another darkly humorous term, a grim parody of the celebrated cattle round up.  Montana ranchers alone lost more than half their herds.
The winter of 1886-87 changed the history of cattle ranching in the West: ranchers would be forced to run smaller herds that could be contained by barbed wire fencing, they also began to raise feed for their herds, and the idea of conserving range grass became a new practice. The extremely profitable days of cattle ranching on the open range, which spanned only fifty years, came to an end.
The Christmas message that year for Montana ranchers was one of endurance and faith. Endurance through the bad times and faith that better times were ahead. Christmas comes, no matter what sorrow has engulfed us in the previous months. Some years this holy holiday will find us youthful and fulfilled, some years it will find us feeling old and in the depths of sorrow wondering if we will ever find our way back. Some years will find us pinching pennies and some years we are able to spend lavishly. Some seasons will find us happily together with our family. Some seasons will find us separated by miles or by disagreements, fractured and hopeless.
The lesson is that Christmas is not about us and what is happening in our lives.  Christmas is bigger than our griefs, problems, and concerns, even when they seem overwhelming.  Christmas is far larger than earthly problems.  No matter what is happening in our lives in late December, the message of Christmas is the same. It's a celebration of the supreme gift of God's love in sending his son to earth as an innocent tiny babe born to poor parents in an era of turbulence and uncertainty. As the words of one of the world's greatest pieces of music, Handel's "Messiah" proclaim, "God with us". The gift of the Christ child sent to us. The light of the world that will never darken.
Whether this December finds you with the good fortune of a picture perfect family, or perhaps grieving the death of a loved one, in the depths of an illness, or beset with problems, the message is still the same. GOD WITH US!  Peace on Earth.  Goodwill to all people.
Merry Christmas to you as you celebrate the birth of Jesus Christ, the light of the world!